Faculty of Government and European Studies is founded on the constitutional values of the young Slovenian country and dedicated to government and European studies. With excellence as its core objective, the faculty is successfully gaining ground as an elite educational centre in Brdo pri Kranju where those with ambition who want and are capable of more can gain professional knowledge for work in and with public administration bodies as well as international institutions. The faculty’s mission comprises delivering first-rate knowledge with the help of leading Slovenian and foreign experts and contributing to the development of a critical and creative mind that will help our students in their personal and professional lives and allow them to, in turn, contribute to a brighter tomorrow: a truly democratic Slovenian state governed by the rule of law and a better, more just world.

The faculty has completed the first year of its existence, which was, taking into consideration the entire Slovenian environment, successful. The faculty educates students at all three cycles of higher education. The programmes are filled to capacity and the students are better every year. This is a good sign for the future, which the faculty intends to grasp with both hands.

The faculty is strongly driven by ambition. Following the model of foreign faculties with a similar orientation but a much longer tradition, we strive to become the central institution educating elite experts that will form the backbone of our country’s state administration in the best sense of the word. The faculty wishes to complete its journey to becoming the main source not only of elite political leaders in Slovenia but also of top Slovenian officials working at EU institutions, which is, after all, the purpose of government and European studies.

The faculty’s main objective is all-round excellence, particularly in the areas of academic education, research, professional training and publishing. The faculty is a promoter of social responsibility and strives to ensure that its professors, alumni and students transfer their knowledge to practice so as to ensure that Slovenia truly becomes what it is expected to be in accordance with its constitutional order: a democratic state governed by the rule of law that is founded on respect for human rights.

In the future, the faculty aims to reach beyond the Slovenian academic borders. This is simply a necessity, and we intend to stand out of the Slovenian average in this area. The Slovenian academic sphere is marked by statism, a very closed nature and all too often by outdated teaching approaches. As such, it is almost completely invisible on the European academic map. The time has come to put Slovenia on the map and join the European academic community, which must not only be restricted to South-Eastern Europe, first as equal participants and eventually as active shapers of the community. The faculty thus intends to establish as many institutional, research and personal connections with foreign faculties as possible. We plan to introduce exchange programmes for professors and students as well as activities for the exchange of good practices in order to ensure our full inclusion in the European academic and research sphere.

In accordance with its vision, the faculty will work in the coming years towards gaining the status of an elite Slovenian educational institution that attracts students who wish to receive an excellent education founded on the faculty’s own research work and delivered by top lecturers. The knowledge they gain will not only help them in their local endeavours but also in their work within our wider political community, the European Union, where the faculty will serve as an active partner. 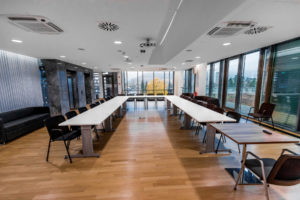